Byte Academy coding bootcamp and Felix Gray eyewear kicked off a collaboration and demo for campus "Fashion Tech Week" paralleling New York Fashion Week in mid February.  Although Felix Gray is only in soft launch, participating Byte Academy students and community members received free Felix Gray glasses for a demo period concluding Friday, February 26.  The glasses have filtering technology which block blue light and reduces eyestrain. Upon conclusion, Felix Gray will talk to Byte students and community members answering questions on the product, the technology behind it, and what startup life is like.

Felix Gray has done similar trials with WeWork, LinkedIn, and other larger startups but Byte Academy, a coding bootcamp focused on developing industry-oriented programming skills,  is the first educational organization participating in the demo. The demo integrated into the Academy's medical technology (MedTech) curriculum.

What is Felix Gray?

The company had a successful crowdfunding campaign in late 2015. The idea was to make glasses which reduce Digital Eye Strain, one of the aftereffects of looking at a screen for long periods of time. All of us have complained of neck pain or tired eyes after working with multiple screens through the day - be they computer, laptop, tablets or cellphones - at some point of time. That physical discomfort is caused Digital Eye Strain and over 65% of Americans face this problem. 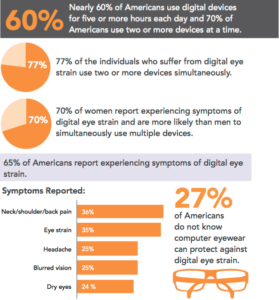 Many times the patients don't even know the solution can be as simple as changing their eyewear, and that's where Felix Gray comes in. Their glasses are equipped with a special technology to reduce eye strain and blurred vision, perfect for people who look at electronic displays for more than two hours a day, ergo, our students.  Learn more about the technology used on their website.

Like other coding environments, Byte Academy students continuously using multiple screens for work. Coders, like the students, and even our instructors spend lengthy amounts of time in front of the computer, just like 96% of Americans who suffer from Digital Eye Strain.

Although other glasses may provide medical technology (MedTech) capabilities, they would be an unlikely choice to attend a runway show.  Felix Gray is one of a kind, their glasses are trendy with  multiple chic frames to choose from, similar to Warby Parker type styles and they are a combination of technology and healthcare. It is a perfect segue way to the launch of Byte Academy’s MedTech program later in the year.  Students also have already taken on FashionTech projects such as technology for wearables.  With glasses such as Felix Gray reducing eyestrain now students can give it their all even more.

Blockchain: the future of tech or just another Dotcom bubble?