How To Choose The Right Tech Stack For You

Before choosing a full stack coding bootcamp,  I did my due diligence (as I recommend anyone should) on both bootcamps and the curriculum that they offer.  I suggest that potential students research different coding and data science bootcamp options on reviews site like SwitchUp, and learn as much as possible about the different languages.

Some languages are preferable for different careers and functions while some languages are more difficult than others.  In choosing a bootcamp, a prospective bootcamp student must realistically consider his or her own background, current expertise and career goals. Needless to say, I was not a computer science major, so I needed to choose an easy language to learn, one that is popular (so I can get a job), and a language that adopts best practices (meaning that it is the future and not the past).

Javascript, Python, and Ruby may be some of the most popular and approachable languages ---choosing between these is the tricky part. To provide some context, I should mention that bootcamps now have 3 main directions: front-end, back-end, an

d data science. Python and Ruby are not “Front-end” like HTML, CSS and JavaScript. They will not make the site look pretty! However both languages are known as “clean” and “easy to read.” and you can start making websites immediately. Still, you will need to complement your Ruby or Python with JavaScript.

JavaScript is a very useful language and is most known for its applications in front-end programming, which is what your browser understands. However, JavaScript can also be used in the back-end, inside the server. Server-side JavaScript is very high performing when wielded by an expert developer and its popularity is on the rise. JavaScript makes a lot of sense in both back-end and front-end development and is a natural choice for a prospective full-stack developer.

Although JavaScript is highly useful for nearly every software developer, I learned that it wasn’t where I wanted to focus my introductory computer programming education.  Instead, I wanted to start out with best practices because I figured that it would be hard to fill in the gaps later (rather than copying and pasting lines of code together as practice by some JavaScript programmers).  After talking to bootcamp graduates, I gained the sense that although the JavaScript programmers produced top portfolios, they were failing on technical interviews because of a lack of computer science background.

Why I Chose Python

Python vs. Ruby vs. JavaScript?  I chose to learn Python due to the language’s practical applications and chose a school (Byte Academy in New York) that was one of the first to focus on it in its full-stack curriculum. Python is a “back-end” language in that it handles the database (often through an ORM that bypasses the need for SQL) and connects all of the different clients with the resources on the server. Python also has the greatest wealth of data science libraries making it very popular in the lucrative data science industry.

While highly effective for data analysis, Python has many of the most popular backend frameworks for full stack as well.  It’s a double threat, like the Python caduceus logo implies (left). Of the three languages mentioned above (JavaScript, Ruby, Python), Python is the most integrated with the unix/linux operating system which endows the language with an unparalleled presence throughout the OS. While sufficient for back-end, front-end web development is JavaScript’s territory (which is also covered in Byte Academy’s “full-stack” curriculum).  For more reasons to learn Python check out the blog here.

Before I arrived at coding school, I had actually earned my MD, which contributed to choosing Python as my primary language of focus.  Python is heavily used in the medical technology industry in addition to other fields that require a lot of data analysis and number crunching, such as finance, data science, even media (Buzzfeed is a big Python shop).   As some examples: Bank of America switched to Python for its trading and risk management platform, Quartz. The language is also popular at Goldman Sachs, JP Morgan and other top-tier banks (where some of our instructors actually hail from). Perhaps due to its applications, a  2016 Course Report survey shows that the Python boot camp grads end up making more money than their counterparts.  For my purposes, Python is great in scientific computing. 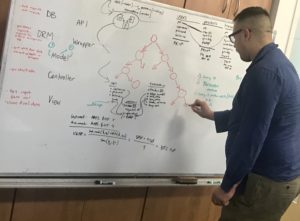 At Byte Academy, the best group projects were developed by people with complementary skills.  Therefore, people who preferred front-end programming worked with those who preferred back-end. Different instructors (full stack vs data science/engineering) and even industry mentors also served as resources for  projects which were built from ground up in a short time period.  Though small scale, the projects were great preparation the “real world” workforce. Even for students that may go into a career in front-end development, starting off with Python or Ruby is a great way to learn programming.

While you may learn unfamiliar sometimes boring technical jargon during the bootcamp experience, you’ll make awesome apps at the same time.  The first app my group made was a command line virtual stock trading platform coded from scratch which we hooked up to an API for stock prices.  Though starting off surprisingly easy, building the app became more difficult as we improved the look, accessibility, security and performance. The instructors are patient so we didn’t worry much about getting lost.

Though a lot of hard work, the bootcamp experience was highly beneficial.  Just like the military, almost everyone is pushed through the transformative experience together (coding bootcamps aren’t compared to military boot camps for nothing). While there is hand holding and code alongs, the instructors will also make you struggle a little.  In the end they will give you their answer with thorough explanation if you cannot arrive to one on your own.

Now that I am almost a graduate I can confidently say to stop wasting time and get your career on the fast track. There are so many great boot camps to choose from out there whether they offer JavaScript, Ruby, Python or another coding language.  For me, I am happiest with Python full stack curriculum I learned at Byte Academy (which, if you aren’t near New York City now offers remote programs too).

How to Break Into Machine Learning